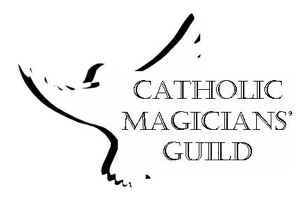 Introduction to the Catholic Magicians’ Guild

The Catholic Magicians’ Guild is an international organization of professional and amateur magicians dedicated to Catholic Gospel Magic.<ref>www.geniimagazine.com/wiki/index.php/Catholic_Magicians’_Guild</ref> The Guild came into being when the group of performers considered the unique needs of Catholic Gospel Magicians. Their principle concern was how to creatively and appropriately use sleight-of-hand and stage illusion to pass on the beliefs of the Catholic faith to youth.<ref>www.insidemagic.com/magicnews/2006/04/27/angelo-stagnaro-is-a-genius-catholic-magicians-guild/</ref>

Though it is an excellent organization, the Fellowship of Christian Magicians didn’t fulfill the unique needs of Catholics Magicians. Some felt constrained or awkward joining the group as it didn’t offer ideas for magic effects and patter appropriate for Catholic theology. Started in 1985, the Catholic Magicians’ Guild:

The CMG is a Catholic organization whose members submit themselves to the guidance of the Holy Spirit and aspire to share Christ’s message and His love to Christian audiences via the medium of stage magic. Everyone is welcome to join the CMG regardless of religious affiliations.

What is Gospel Magic?

St. John Don Melchoir Bosco, an Italian priest born in Becchi, Piedmont, Italy invented what latter came to be called Gospel Magic. During the latter half of the 19th century, as the poor of Europe struggled to eke out life during the Age of Industrialization, Don Bosco saw how most of the children in his village remained uneducated and without faith in God. Taking care of their physical needs of food, clothing and shelter were difficult enough but Don Bosco wanted more. He wanted to make sure that these children grew up to be dedicated and enlightened Christians.

He remembered the magic he would perform for his friends when he was a child and decided that that was the best way to bring children back to the Church. This was the beginning of Gospel Magic, that is, the altering or tailoring of a magic performance so that it can be used to instruct people on some aspect of Christian theology. Among the magic effects that Don Bosco used to teach Christian theological principles, he was said to be able to tie three ropes together to form one seamless rope in order to explain the mystery of the Christian Trinity.

As magic is a richly sensory experience, one can see the spiritual applications that magic can offer as a pedagogic tool. Typical magic effects used by Gospel Magicians look very much like any other magic trick one has come across but the patter, or story weaved by the magician, is directed to demonstrate such theological principles as God’s love and forgiveness, Christ’s parables, the Immaculate Conception, the Sacraments, or even free will can be the subject of a Gospel Magic performance.

”Totus Tuus” is the Catholic Magicians’ Guild’s quarterly e-zine.<ref>http://lists.topica.com/lists/TotusTuus</ref> Chris Knabenshue and Angelo Stagnaro serve as co-editors of the electronic magazine.<ref>www.catholic.com/radio/calendar_download.php?downloadType=4&event=5098</ref> The phase, Totus Tuus, is Latin for Totally Yours. It was often used by the late Pope John Paul II to refer to complete devotion and total surrender to God.

To subscribe to Totus Tuus simply go to: http://lists.topica.com/lists/TotusTuus

Chris Knabenshue’s website, http://www.CatholicMagic.com, serves as the Catholic Magicians’ Guild’s main website. It is a place where Christian Magicians can learn about a unique form of ministry to the Church. Visitors can discuss ideas for patter for their effects on the site’s forum and to contribute effects and patter ideas on the site’s database. The site is also a resource for lay people interested in booking a Gospel Magician by searching through the profiles posted on the site.

Catholic magicians around the world, principally in Europe (especially southern Europe,) North America, Philippines, Australia and Latin America, seek out their own ways of performing Gospel Magic. Some suggestions include:

The Patron Saints of Catholic Magicians

The ”CMG” recognizes many saints as patrons of our art including:

Members of the CMG

Before every performance, I offer my performance to God. I also ask for the special intervention of St Don Bosco, Patron of Magicians. But, as St Augustine rightly points out, we should pray as if all depended upon God and act as if all depended upon us. It is imperative that you are familiar with your effects you are planning on performing and the theological lesson you are presenting.

Take advantage of as much theological and cathetical training as possible. Furthermore, if you are in doubt as to a particular theological issue do not hesitate to consult your parish priest or a Catholic theologian.

A Gospel Magician is not simply an entertainer. He or she is principally a catechist. It’s wonderful to have fun but it’s more important to be a teacher. Magic is only a vehicle by which you will impart knowledge and understanding.

You are a Gospel Magician. Carry the joy and love of Christ in your heart when you perform before others, especially children. St. Francis of Assisi warns us that it is not fitting, when one is in God’s service, to have a gloomy face or a chilling look.

I wear a crucifix around my neck when I perform Gospel Magic to remind my classes that I am there as a catechist and not as an entertainer. Though, of course, I hope that while they are being entertained, they are being edified. Having a crucifix or icon present in the room is also an excellent way to remember that you are not performing magic for magic’s sake. You are there as a minister, an educator and a catechist. It’s hoped that your class/audience will be entertained but that is not the final end of your performance. The real end of your performance is to point to God and to inspire those around you to love and honor Him.

If you are successful during your performance, remember to tell your audience that your skills aren’t yours but God’s. St. Francis of Assisi teaches us that true progress quietly and persistently moves along without notice.

Christ must be the main reason for your performance. You are a Gospel magician in order to proclaim God’s Word. He is present during your opportunity to teach. Allow Him into your life and He will allow you into His.

The Structure of Catholic Magicians’ Guild

There are three Orders of the Magi in the Catholic Magicians’ Guild named after the Three Wise Men who serve as patronal saints of the Orders:

One advances through the three Guild orders by showing a dedication to the art of Gospel magic and/or magic used in service of the Church. The Counsel of Mages meets annually to decide which magi can advance through the orders. Members of each order are referred to as “magus” and may use the title in their advertisement materials. Magi may also use the post-nominal initials listed above in their signatures. The following is an example:

Requirements of Membership in the Catholic Magicians’ Guild

A magus of the Catholic Magicians’ Guild must:

The Counsel of Mages

Twelve magi are nominated every year to the serve on the Counsel of Mages, the governing body of the Catholic Magicians’ Guild.

Each one, as a good manager of God’s different gifts, must use for the good of others the special gift he has received from God. Those who preach must preach God’s messages; those who serve must serve with the strength that God gives them, so that in all things praise may be given to God through Jesus Christ, to whom belong glory and power forever and ever. Amen. (1 Peter 4:10-11)